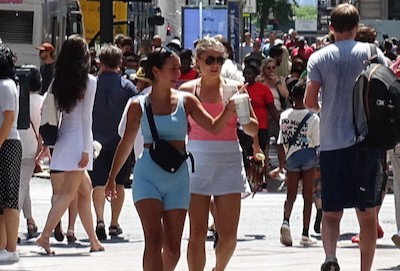 Weather. The temperature highs will be in the mid to high 90's today, falling into the mid 80's for the rest of the week. The temperature lows will be around 70 all week. The humidity will rise from the mid 50's early Tuesday to the mid 70's by Wednesday, falling back to about 60% on Thursday and a comfortable 50% on Friday. There's a 50% chance of a 1/10th inch of rain between 5 - 10 pm Tuesday, and a 50 - 75% chance of about a half inch or more of rain between 11 pm Wednesday and 9 am Thursday. By Friday it's a very nice day, leading into a very nice weekend.

This past weekend I noticed that half or less of the passengers on the subway appear to be following the mask mandate. To the MTA I suggest either enforce the mandate, or withdraw it. You weaken the government's credibility and ability to enforce compliance, when you mandate something and then do not follow through by properly / evenly enforcing it. Every good parent knows that.

The BA.5 variant of CoVid grew rapidly from under 10% at the beginning of June 2022, to above 80% by the end of July. Cases rose briefly during that period, before falling back again. About 79% of all Americans have received at least one dose of the vaccine, while about 68% have received two or more. In NYS 91% of New Yorkers have received at least one dose, while 78% have received two or more doses. Because the population has finally come around to getting vaccinated, the hospitalization rates for CoVid are fairly low, with only a small percentage of hospital beds being utilized for CoVid patients, most of which are occupied by the non-vaxers.

Bear in mind that it's the summertime, which is the off season for the disease, because folks are outdoors.

On Friday, August 5, 2022 President Biden declared Monkey Pox a public health emergency. According to the CDC, monkey pox cases have risen to about 8,934 as of Monday, August 8, 2022. The first case reported to the CDC in this country was on May 17, 2022. 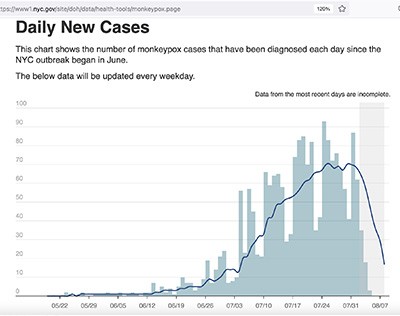 In New York City, monkey pox cases have risen to 1,965 according to the NYC government, so NYC represents between a fifth and a quarter of the total in the U.S. About 90% of the cases have been found in the gay community, but like HIV / AIDs, while it appears to be predominantly transmitted between gay men, anyone can catch it.

Monkey pox has been spreading primarily through sexual contact, but it can also be spread through bodily fluids like saliva, and via clothing or bedding, and in a few cases it was even spread via prolonged, close, face-to-face contact. It becomes manifest as a rash, and can take as long as four weeks to go away. There are treatments to help get through the disease once you have it, but getting vaccinated, particularly if you're a gay man, is your best bet. To date NYC has received 79,000 vaccination doses, and it is estimated that there are about 150,000 New Yorkers in the highly susceptible monkey pox group.

While monkey pox vaccination doses are being manufactured to ramp up to demand, authorities have been devising strategies to mitigate the spread by prioritizing first [of two] doses and evaluating the possibility of reducing the size of each dose, in order to increase the number of doses available.

The good news, is that because of the rapid spread of health information surrounding the disease, how and where it's spread, and the fairly rapid response in distributing and administering vaccines, the new monkey pox case count in NYC has already plummeted, as you can see from the chart I found on the NYC government website.

There are monkey pox vaccination clinics in all five boroughs which you can find, along with more information about the virus, at

Tourism Bounces Back in NYC, but Foreign Visits Lagging Domestics, Likely Because of the Strong Dollar & not Crime as Many News Outlets Suggest 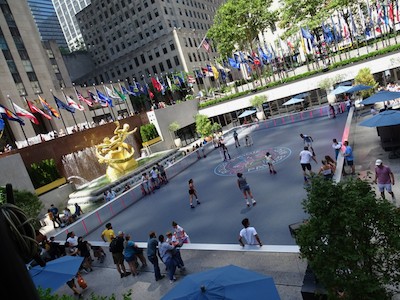 Over the course of the past few months, I've noticed a healthy return of the tourism trade based on what I've been seeing and hearing as I walk the streets and take public transit.

In 2019, prior to the pandemic, NYC welcomed about 65 million visitors, of which about 13 million were from foreign countries. The foreigners generally stay longer and spend more than domestic tourists. This year, 2022, it is estimated that NYC will welcome about 56 million tourists, of which about 8 million are expected to come from other nations. This means about 95% of the domestic tourism trade will return, while only about 60% of the foreign tourist trade will return this year.

While many news outlets appear to hype violent crime as the culprit in discouraging the foreign tourist trade, I think the fact that the Euro has fallen about 20% versus the dollar is more likely the cause. Because the Euro currency fall, visiting New York is more expensive by about 20%, to Euro currency visitors, who comprise a large share of our foreign tourism.

The tourism trade contributes between 5% [wages] to 8% [employment] of NYC revenue. 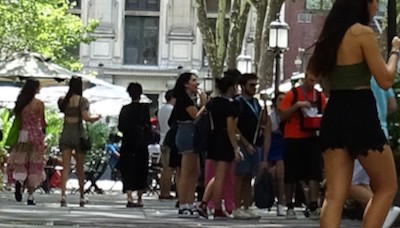 The pandemic changed most of our lives in some fashion, while turning many people's lives completely upside down for a while. Many service businesses, like restaurants and hotels, saw a huge falloff in business. The airline industry and other transit businesses took a huge hit. The live entertainment industry, such as we see on Broadway, faded to black - meaning it nearly completely shut down.

So while the service businesses were getting hammered, the goods businesses were thriving. Consumers shifted their spending from doing things related to the service businesses identified above, to buying more goods, particularly those that would make staying at home more comfortable or pleasureable. This put added pressure on the demand for goods, while manufacturers were having trouble keeping their workforces healthy enough to continue producing and shipping their goods. Bottlenecks cropped up.

Conversely, as the pandemic has unwound, service businesses are bouncing back. We saw this in the huge employment increase in the July jobs report, where the economy added over a half million new jobs. A healthy normal monthly number of new jobs is somewhere in the neighborhood of 250,000 to 300,000 new jobs. So, now we're working through a backlog of pent up service demand.

What's my point in all of this? It's that we all need to stay calm and remain patient, as the boat / community collectively rights itself, returning back into some sort on new normalized equilibrium.

The Supreme Court didn't help things any, by striking down a prior, century-old court ruling enabling NYS to screen folks who want to walk the streets armed. Governor Hochul responded fairly quickly, by proposing legislation that will make carrrying a weapon inside government buildings, schools and so forth illegal.

The bit of good news is that on June 25, 2022 President Biden signed a gun safety bill into law. It was the first in 30 years. The bill included: 1) federal incentives for states to pass red flag laws, which would enable petitioners to ask the government to take firearms away from folks deemed dangerous, 2) it expanded background checks of people aged 18 - 21 who wish to purchase weapons, and 3) prevents people convicted of domestic abuse from owning a gun, whether that abuse was directed at a spouse [in prior law] or a dating partner [new law change / addition]. While many, including the President, didn't feel the new legislation went far enough, it does move the gun violence needle a little bit in the right direction.