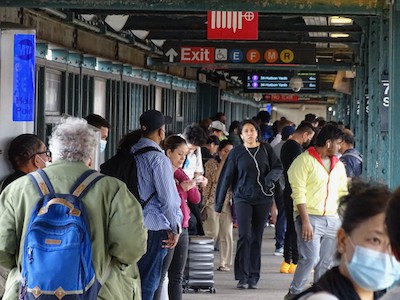 NYC Weather. The temperature highs will be in the high 70's and the temperature lows around 60. It will be sunny the rest of the week, with humidity ranging from 40% - 60%, which is fairly dry. Winds will be 5 - 10 mph, falling as the week wears on. No rain is expected between now and Friday evening, nor through the coming weekend.

So, a lot has happened since we last posted a news update. At right is a photo of one of the outer borough subway stations this summer. As you can see, mask wearing compliance has diminished.

On Thursday, September 8th, the first day of the NYC public schools reopening, the MTA transported 3.6 million people. That's the highest ridership number since the pandemic began two and a half years ago in March of 2020.

In our August 9th report [see below] we suggested the MTA drop the mask mandate or enforce it. At the time we noticed that less than half of the passengers on the subway seemed to be adhering to the mask mandate. On September 7th, NYS Governor Hochul rescinded the mask mandate on the MTA, making masking optional, but still recommended that we continue masking on the MTA as we enter the colder months, when folks go indoors, where the probability of infection by airborne viruses like CoVid and the flu increases. The guidance is particularly relevant to those who are older or have underlying conditions, but it's also not unwise for everyone else too.

This Follows the Passage of Federal Gun Restrictions by Congress in June, Biden's April Executive Order in Requiring Ghost Gun Sales be Handled in the Same Manner as Gun Sales & Mayor Adams & the NYPD's Effort to Remove Illegal Guns from NYC Streets

On June 25th, President Biden signed the Bipartisan Safer Communities Act. This is legislation that passed both the Senate and Congress earlier in the month. A number of moderate Republicans crossed the aisle in both the House and Senate to vote with the Democrats, on reigning in the gun violence free-for-all that we've been witnessing the past couple of years.

The federal gun legislation was the first of its kind to pass both houses and be signed into law in about 30 years. Among other things it enhances background checks for younger gun owners [under 21], and provides law enforcement with additional authority and responsibility to thwart potential shooters by empowering them to curtail a gun owner's rights if there's reason to believe that person poses a risk to the general welfare of the community. Added funding was also provided to incent law enforcement to pay more attention to problematic gun owners.

The Biden Ghost Gun sale regulations went into effect on August 24, 2022, following a failed court challenge to block the President's April 2022 Executive Order requiring ghost gun sales to be treated the same as other firearm sales.

In addition to the actions taken at the federal level, Mayor Adams has been working with the NYPD to reduce shootings through changes in NYC law enforcement to take illegal guns off the street. Year to date [as of end of August 2022], the NYPD had removed 4,880 illegal guns from the streets of which 405 of them were removed in August.

We'll have a few more items to add, including on NYC public schools, on Wednesday 9.14.22. In the meantime, I hope you're having a nice week.