The UN is Back Live in Session, a look at the Argument for Democracies vs Dictatorships, & What's with the Royalist TV News Groupies? 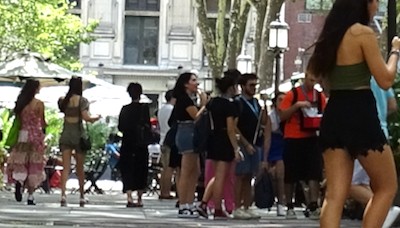 NYC Weather. The temperature highs will be in the low 80's on Tuesday & Wednesday, dropping to the low 70's on Thursday and the mid 60's on Friday., The temperature lows will rise from the mid 60's on Monday & Tuesday to the low 70's on Wednesday, and then fall into the mid to low 50's on Thursday and Friday. The winds will be 10 - 15 mph all week. The humidity will be 55% - 65% all week, except on Friday when it falls to 45% - 55%. There's a small chance of a small amount of rain in Thursday, with the probability gone by mid afternoon.

For about the past six months, only about 10% of white collar office workers in Manhattan, go to the office daily. But the number of people in the office each day has risen from about 38% to 49%, according to Parnership for New York City, a non-profit dedicated to primarily promoting the economic interests of NYC. Also, the percentage of workers staying fully remote dropped from 28% to 16% over the same six month period [April - September]. Nearly four out of five employers [77%] indicated that the preferred business model [demanded per employees] is now ready to accommodate folks who only want to travel to the office three of the five days in a work week.

There's a flip side of the coin above, which is that employers who accommodate remote workers, especially women who want to spend time rearing their children, could, over time, attract and retain some of the best and the brightest, even if they don't pay top dollar. For some, including myself, money matters - but it isn't everything.

Ultimately, time will tell, and it will be interesting to see how this all plays out. One thing is clear, many of us - if not all - are not going back to the status quo.

Speaking of Working Remotely, How about the United Nations in General Assembly?

Since 2019, the United Nations has met primarily remotely. They missed 2020 and 2021, but this year, they're back in session live. So for the next nine days those who travel up and down the east side in the 40's and above and below, will be heard complaining of the traffic jams. The jams will be most pronounced this week, particulary starting Tuesday, when all the dignitaries travel from the funeral of Queen Elizabeth, to the UN General Assembly Session in NYC.

On Wednesday, President Biden will address the United Nations, to talk about many things including the Ukrainian War and the ongoing threats to democracy worldwide. It is my opinion, that the threats to democracy include most - if not all autocrats. Dictators by any name [such as the Russian and Chinese 'presidents'] are a destabilizing x factor in the world today. Thus, it's no surprise that the two most powerful dictator presidents [how's that for an oxymoron?] won't be in attendance at the United Nations General Assembly this year. Those are Russian dictator president Putin and Chinese dictator president Xi Jinping. Indian Prime Minister Narendra Modi and the President of Ethiopia will also not be in attendance. On the latter two, no reasons have been given.

I think it's worth noting here, that the difference between dictatorships and democracies is that democracies operate under rule of law, while dictatorships operate under rule by one man's or a few men's decree. In a democracy if someone has a point of view that resonates with the general public it can be heard, while in a dictatorship only a few people's point of view is given any attention. So what happens in a dictatorship is that the truth is suppressed, oftentime by harsh or violent measures, because it lays bare the idiocy of the dictator. Because of that, loyalty - not talent - is how people are evaluated in dictatorships, oftentimes leading to the promotion of the most brutal people in society instead of the most intelligent, most learned, most experienced and most talented. Sad, but true. In dictatorships the morons and the psychopaths are elevated to positions of power.

If you want to know why, for ten million years, mankind lived pretty much similar lives [meaning hand to mouth], and then suddenly in the 1600's onward, mankind flourished, you need only look at the people wresting power away from monarchs, who were and oftentimes still are [Saudi Royals], brutal dictators who hoard all of their society's resources.

Why did the American TV Networks Behave like a Sycophantic Royalist Clique?

The past week of the network TV news organizations' coverage of Queen Elizabeth's death and funeral made me - as I said last week - feel a need to barf. If they spent that kind of money, that kind of energy and that kind airtime on things that really matter, this world wouldn't be as messed up as it currently is. What the TV newsfolks presented this past week was a lot of fluffy pageantry and obsequious nothingness, for a extremely wealthy old woman and her 'royal' family. A family that has so much wealth, that they took from so many of their fellow country[wo]men [and others via the colonial empire], and with which they have done so little that really matters.

That said, I must applaud former Prince Charles for his support in pursuit of remedies for climate change. But Queen Elizabeth seemed to do nothing at all for mankind, and I saw nothing on TV [no facts] that convinced me otherwise.

I reckon the TV announcers have forgotten that this is the same family that America had to go to war with, to obtain its freedom about 250 years ago. King George III, who was defeated in the American Revolutionary War, was the great, great, great grandfather of Queen Elizabeth. Little mention was made of the British royal family's centuries long exploitation of others, while amassing so much of that nation's and their colonies' wealth. Instead of talking about the reality of royalty and royal families, the TV broadcasters gushed with a lot of read-and-repeat, mindless gossip.

Stay tuned. We have some interesting, real news, stories coming your way this fall.

In the meantime have a nice week.