De Blasio Decides Not to Run for NYS Governor, Hochul's Fundraising Haul, NYC Violent Crime Up Slightly in 2021, but NYC Homicides Still Below the National Average & To Be or Not To Be - do we want to Politicize the Guns / Violent Crime Problem or Solve it? This morning, January 18, 2022, former NYC Mayor Bill de Blasio announced that he will not seek the Governor’s office on Twitter.

De Blasio mentioned some of his accomplishments during his eight years as Mayor including Universal Pre-K, building hundreds of thousands affordable housing units, implementing some police reforms at the NYPD to make policing fairer, and efforts to transition NYC to cleaner energy. He didn’t say what his future plans were, only that he would be announcing them from his neighborhood in Brooklyn.

Governor Kathy Hochul is well positioned for the NYS Governors race this year. Hochul received the very early endorsement of the NYS Democratic Party Chairman Jay Jacobs in October of 2021, and has raised $21.6 million since she announced her candidacy in August of 2021. It's a record for the five month period, and about the same amount of money that former Governor Andrew Cuomo had to ward off challengers in 2018. NYC Public Advocate Jumaane Williams and 3rd District [Nassau County] Congressman Thomas Suozzi have announced their candidacies. In December of 2021, Attorney General Letitia James withdrew her candidacy, in favor of running for reelection in her current post.

On the Republican side of the race there's former Westchester County Executive Rob Astorino, who is running against newcomer Andrew Giuliani, who's primary claim to fame is that he is the son of Rudy, the former NYC Mayor with the same surname and Lee Zeldin, a Congressman from Long Island.

In fundraising as well as in polling, Hochul seems to have all the advantages at this point in the campaign. Her nearest competitor in polling recently done by Siena would have been de Blasio, who had 12% of the vote versus Hochul's 46%. NYC Public Advocate Jumaane Williams was next with 11% and Suozzi with 6%. The Suozzi campaign has about $5 million in campaign funding, $2 million of which was transferred from his congressional campaign. Republican Astorino has about $1.3 million, and none of the other contestants released their funding.

A number of snide comments were made in the wake of Hochul's record haul and competitive fundraising position for the upcoming June primary. She was compared to Cuomo with allusions to the possibility of corruption, but nothing specific was provided to support those insinuations.

De Blasio’s announcement came as I was working on an update report on NYC crime. Unfortunately, the NYPD doesn’t publish a December monthly report, like they do every other month, so it’s more challenging to do a year end tally. Hence, this report won’t be as comprehensive as some of the others I’ve done the past couple of years, and will instead focus mostly on shootings and the murder rate.

Thefts Down Significantly / Murders Up Slightly & Still Below the National Average / Most Other Crimes up in Low to Mid Single Digits with Some Exceptions ... The outlier in the year end crime stats, which were up slightly from 2020, was that thefts were down almost 19%. This may have something to do with the fact that fewer people are out and about, so thieves have fewer to prey upon and the victims have fewer distractions and events where thefts may occur.

As for other salient changes in the main categories, Grand Larceny was up about 12% while Grand Larceny Auto was up 14%, Other (than rape) Sex Crimes were up 30%, Misdemeanour Assault was up 10%, and Hate Crimes were up 93%. It's worth noting that only murders and hate crimes are counted in the hundreds - not thousands.

The murders in NYC were up slightly in 2021 versus 2020. Note that the graph at right is for the entire nation and in 2020 - not 2021. The purpose is so that you can have context in evaluating where we are and what's going on.

But Shootings & Murders were up Significantly in the Bronx, which by Implication Means they were Down in Other Boros In spite of a laudable effort by the NYPD to rein in illegal transport of guns, shootings were only about flat with 2020, during which shootings had spiked. According to NYPD CompuStat 2.0 as of 12/19/21, there were 1828 shooting victims in NYC, versus 1821 in the prior year of 2020.

Contrary to Impressions Given by Murdoch's Manipulative Fake News Outlets, Violent Crime is Highest in Republican Governed States - but this Sort of Labeling & Politicizing an Issue isn't Helpful The increase in violence is accompanied by significant rises in the purchase of firearms. For the year 2021 approximately 18 million guns were sold, of which more than 2.4 million were sold to first time buyers. This is the second highest gun sales year on record, following the surge of the pandemic fueled gun buying spree of 2020 where 22.8 million guns were sold, including to 5.0 million first time gun buyers.

The problem with these record gun sales - and to new owners - is that while NYC and NYS and neighboring states have restrictive firearm laws, guns are being transported into the city and state by illegal gun runners from other states that employ less oversight over gun sales. It's called the I-95 Iron Pipeline - see graphic at right.

Using InterState Commerce Regulatory Powers May be a Viable Method of Aiding Municipal and State Authorities in Curtailing Gun Trafficking, but it's a Clumsy Approach to the Problem vis a vis Passing More Effective Gun Legislation

I believe one tool at the disposal of the Biden Administration would be to use federal agencies like the Alcohol, Firearms, Tobacco and Explosives Agency to intercept gun runners coming up along the Iron Pipeline from southern states like Florida to NY and NJ and charge them with violating interstate commerce laws which fall in the jurisdiction of the federal government. A few high profile arrests with significant penalties might help discourage the gun running trade, but nothing is going to be as efficient, nor as effective as passing new gun legislation in line with the majority of American's opinions regarding gun legislation [see below].

The Mass Media Brands of Australian born Billionaire Rupert Murdoch Politicize the Guns & Violent Crime Debate, by Blaming one Political Party in order to Toxify the Debate, which Precludes an Honest & Reasonable Discussion About how to Fix the Problem One can’t intelligently talk about issues or high profile government officials, without addressing the 800 lb. Australian born billionaire propagandist in the room. Rupert Murdoch’s overwhelming share of America’s national mass media influences tens - if not hundreds of millions of Americans’ perception of events, issues and personalities. And far too often it seems, he’s in hot pursuit of filling his own pockets, instead of doing anything for the community, whether it’s at the city, state, federal or even international level.

Murdoch tightly controls Fox News, the NY Post and the Wall St. Journal and increasingly seems to have infiltrated ABC News, where he and two of 21st Century Fox funds are the three largest shareholders. Thus, through this ownership of the lion’s share of American mass media, Murdoch has both toxified and politicized debating the issue of guns and violent crime between Democrats and Republicans - even though most Americans agree on multiple approaches to reining in the problem.

For this issue, the Murdoch narrative is designed to label violent crime a Democrat caused problem. This deflects attention away from solving the problem, crippling efforts by Democrats and moderate Republicans to address the issue. By politicizing Americans’ views of crime, the Australian born billionaire propagandist ensures that we Americans can’t come together to solve the problem by reining it in. Murdoch with his overwhelming share of national / local mass media appear to employ this same technique over and over and over again. Just within the past two years Murdoch’s Fox News appeared to politicize and toxify the results / fairness of the 2020 election results by 1) publicizing unsubstantiated, fraudulent accusations of voting machine failures, and 2) hyping Trump’s stop the steal campaign.

Likewise in 2020, Murdoch’s Fox News and other entities seemed to obstruct government efforts to rein in CoVid as a public health problem, by allowing Fox propagandists like Sean Hannity to label CoVid a Hoax, Trish Regan to call it an Impeachment ploy, and Laura Ingraham to dismissively accuse Democrats of using CoVid to score political points. Generally, I don’t think it’s productive to label an issue as Republican or Democrat as we are all Americans and we all live in the same communities. When someone labels things like this it’s generally to use for their own selfish interests. And when they label it dishonestly, like too often Murdoch mass media see, tp do, you can be sure it’s for Murdoch's own interests. But when issues are labeled dishonestly, that dishonesty must be called out and debunked.

Hence, I did a little research and found that the highest murder rates per 100,000 people [the standard metric] are mostly found in Republican controlled states. You can see for yourself in the CDC chart at right, which shows the murder rates of the top 13 states [I cut off the chart there to prove a point, while the CDC showed all 50 states in descending order].

I did a bit more research to find that 11 of the 13 states with the highest murder rates are governed by Republicans. On the list to your right only New Mexico and Nevada are governed by Democrats.

I don't think either political party should be blamed for crime per se. I think the root causes of crime should be discussed and then possible solutions identified on how to mitigate them. But Murdoch's Fox News and his other manipulative media, opportunistically politicize issues by labeling them and attributing blame for them, to the party that doesn't give Murdoch whatever he wants. After which, Murdoch media then uses the negative labels they created, to manipulate the views of the low information / easy to fool members of their audiences, in order to convince them to vote for pliable Murdoch preferred candidates. And thus, the Australian born billionaire can plug his snout back into the public trough and start pigging out again, at our collective expense. Murdoch has been doing this for decades in Australia, Britain and increasingly here in the United States. A March 2021 poll by USA Today and Ipsos showed that two thirds of Americans favor stricter gun control, including half of all gun owners. Democrats favor it by 90%, while Independents favor it by 66% and 35% of Republicans. Overwhelmingly, Americans favor instituting background checks for purchasers of firearms, with 55% of gun owners favoring such action including 82% of Democrats, 62% of Independents and 40% of Republicans [versus 41% who say no]. from purchasing guns. A similar percentage, 83 percent, support limitinggun purchases to those 21 and older. Eighty percent think there should be a mandatory three-day waiting period before someone can take home a gun. And 72 percent support banning high-capacity magazines ..."

So if We The People want to get serious about crime, we need to ignore Murdoch the Manipulator's assignment of blame to one party or another, and pass some meaningful gun control legislation for the nation and its children.

The new NYC Mayor and the new Police Commissioner may be able to mitigate some of the violence associated with the rise in gun sales, but the work they do without meaningful gun legislation is a band aid - not a solution to the problem. 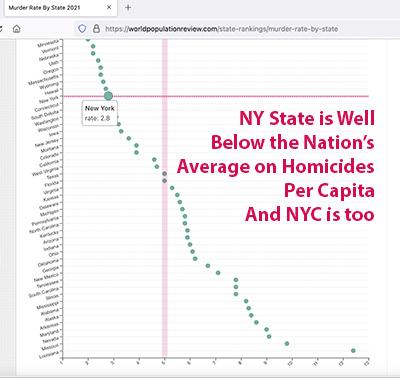 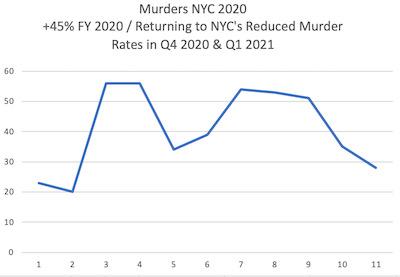 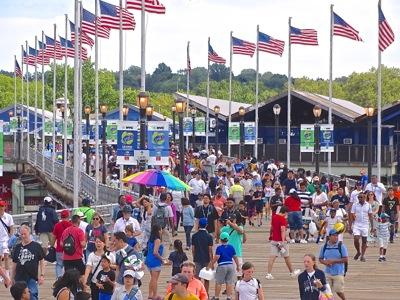 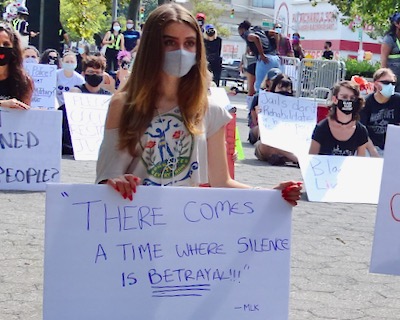