The Phony Patriotism of These Two Men Becomes Increasingly Obvious

After Assaulting the Institutions of our Democracy, Culminating in the January 6th Insurrection, they're Urging Americans to Boycott our National Pastime

This Must be a Proud Putin Pleaser As you know, Georgia passed a sweeping election reform bill on March 25, 2021. It has been characterized as designed to limit voting participation of Democrats, a party in which far more women and ethnic minorities are represented, than in the Republican party. The Governor and both bodies of the legislature in Georgia are all currently dominated by Republicans.

President Biden called it a return to Jim Crow. Jim Crow is the name given to state and local laws passed by white southerners following the Civil War to maintain racial segregation, and white supremacy in the south.

A Summary of Most of the Salient Points of the Law The following is mostly a paraphrasing / summary of an April 2, 2021 report in the NYT on the law. But I left a couple of things out, and added in a small bit of commentary.

The law, in a nutshell, requires photo ID's to be used in tandem with mail and absentee ballots. This includes following the instructions to a "T" or risk having your absentee or mailed vote disqualified. Election officials are not allowed to mail out absentee or mail ballot applications to anyone unless specifically requested by the voter or an authorized designee. This past year applications were mailed in an effort to encourage people to vote / participate. Drop boxes have been limited to one for every 100,000 voters. This is a significant reduction, especially in densely populated areas. According to PBS in heavily Democratic Fulton County that means the number of drops boxes falls from 38 to 8.

Mobile voting polling stations are banned. The early voting hours have been limited on the weekends to between 9 am and 5 pm but those hours may extended to between 7 am and 7 pm, if the site complies with certain guidelines. Nobody may hand out food or water to voters standing in line within 150 feet of the polling place. This is now a misdemeanor crime. Provisional ballots, which are ballots filled out at a polling site where the voter is not currently registered, is subject to restrictions that go well beyond validating the voter is eligible to cast a vote to be counted. Polling hours can only be extended for a set period of time by a judge, if problems prevent voters from casting their ballots during the regular poll site hours. This is a common occurrence in hotly contested elections. New restrictions on tabulation of results will likely delay the reporting of them, which in the past election enabled Trump & Co to spread falsehoods about the election in the absent of concrete results. The Republican dominated General Assembly will select the Chairperson of the State Election Board. The Republican dominated legislature is empowered to remove up to four county election officials. The time period for runoff elections will be significantly shortened.

Why are Trump & Murdoch's Fox 'News' Urging a Boycott of America's Pastime?

The Phony Patriotism of These Two Men Becomes Increasingly Obvious

After Assaulting the Institutions of our Democracy, Culminating in the January 6th Insurrection, they're Urging Americans to Boycott our National Pastime

This Must be a Putin Pleaser

American Corporations Speak Up Because Laws of this Nature Seem UnAmerican Delta Airlines and Coca Cola took strong positions assailing the bill, with the Delta CEO saying that the impetus for this bill was based on a lie [Trump's stop the steal fundraising scam] and the Coca Cola CEO said that the bill was a step backward, it was wrong and the bill needed to be remedied. This was followed by similar statements made by the CEO's of Apple Computer and Chase Bank.

But actions speak louder than words, and the CEO of Major League Baseball pulled the All Star game from Atlanta as a result of the legislation.

That sent Republicans into a tizzy, led by Putin protege Donald the Divider, with assists by Murdoch's Fox News mendicants like that seemingly racist Tucker ... Carlson, and the great grandson of two slave owning families, Republican Senate Minority Leader Mitch McConnell. In the graphic above, McConnell tells corporate America to shut up and just send him your money. See the report we did on McConnell and his wife Elaine Chao, and how they seem tto be working the system in China's favor.

The Real Reasons Murdoch & Trump are Urging a Boycott of the MLB? Follow the Money But let me say a few more things. Murdoch's Fox News criticized some of these corporations for not assailing China, while taking a stand in Georgia. If it weren't Murdoch angling for another media manipulation, I would say good point. But acting with integrity, like charity, should start at home. And Murdoch seems to neither act with integrity nor donate to charity.

It's worth mentioning that in 1998, Murdoch's Harper Collins Publishing unit pulled the publication of a book critical of China, entitled The Last Governor (of Hong Kong) by Chris Patten, because China essentially told him to. It was a business decision. And as usual, Murdoch opted for money. And the Premier of China (in exchange?) promoted the Titanic film in China, where 21st Century Fox did a gangbusters business that by far outpaced what would have been the sales of the Harper Collins book.

So what does Murdoch's Fox News headline say about those speaking up about the MLB decision to move the All Star Game to another market? They feature Marco Rubio saying that these corporations are taking a stand because there may not be a significant financial fallout.

Why did Fox use its Newspeak to Support the Trump Call to Boycott MLB? So, perhaps the reason Murdoch's Fox News Tucker Carlson went into Fox News Speak talking about 'woke' corporations and 'cancel culture'was to help Murdoch make more money. News speak is a term coined by author George Orwell, in his book 1984, which was published in 1949, a few years after the defeat of the Nazis in WWII. According to Wikipedia, Newspeak is,

"Newspeak is a controlled language of simplified grammar and restricted vocabulary designed to limit the individual's ability to think and articulate "subversive" concepts such as personal identity, self-expression and free will."

A quote by Orwell, in his review of Hitler's Mein Kampf, comes to mind [per a Washington Post report on February 25, 2015].

"... What [Hitler] envisages, a hundred years hence, is a continuous state of 250 million Germans with plenty of “living room” (i.e. stretching to Afghanistan or thereabouts), a horrible brainless empire in which, essentially, nothing ever happens except the training of young men for war and the endless breeding of fresh cannon-fodder. How was it that he was able to put this monstrous vision across? ..."

The graphic above is the international symbol for Orwellian newspeak, which still seems in practice in English speaking democracies around the world - thanks to global propagandist billionaire Rupert Murdoch. Murdoch's mass media manufactures and disseminates newspeak labels, through propagandist pundits like Tucker and Shammity, which are babbled by Murdoch's mendacious morons to unsuspecting audiences around the globe.

Tucker Carlson alleged that the MLB was exercising veto power over the democratic process. Tucker is a master spinner, who I've seen turn stories around 180 degrees from the truth - and this story is no exception. Here's another where I provided a point by point on his very slick twisting of the truth into an anger inciting lie [you can view the video if you're above age 18 and have a Youtube account]. So is Trump using his shock jock confrontation with the MLB to raise money for himself to cover his debts? As you can see by the graphic above, he's been on a fundraising tear since his loss, by using his 'Big Lie' of 'Stop the Steal' and now 'election integrity' to dupe his patriotic audience into thinking they're doing something good for the nation, by turn out their pockets to one of America's greatest con men since W.C. Fields, who - if you read the fine print - is using the money to pay off his debts. This is not Trump's first scam. There was [Russian?] money laundering at the Trump Taj Mahal, Trump University, Trump Charities, Trump SoHo, Trump Airline and all those poor contractors and employees who tried to sue the Donald to make him pay what was alleged to be due them.

Trump's manipulation of his base, by tapping into their thoughtless patriotism, was such a successful Trump scam following the election in November 2020 [raised about a quarter billion in donations], that just prior to the Capitol Insurrection of January 6, 2021, Senators Ted Cruz and Josh Hawley appeared to jump on the 'Big Lie' fundraising bandwagon to clean up all that free money from naive rubes? So why not do it again? W.C. Fields said, "Never give a sucker an even break." That should be the new slogan of the new Trump Republican Party.

Does Miserly Money Bags Murdoch Use His Propaganda Outlets to Make More $$$ by Deceiving Those in the Audience Who Trust Him? And Murdoch is the largest shareholder in Disney / ABC which has been negotiations to renew the rights for a multi-year contract on a number of MLB games. The rights fees on other deals the MLB consumated, have risen dramatically, and Murdoch is nothing - if not stingy - in matters other than his well oiled propaganda machine. If Fox and Trump can reduce the expectation of good MLB ratings via what is sure to become a temporary boycott - if anything at all - then perhaps Murdoch's Disney / ABC / ESPN can get a lower price? These deals are worth hundreds of millions to billions.

Very little surprises me with these two self absorbed billionaires, especially when it comes to deceiving the American and other peoples, in order to enrich and empower themselves to no meaningful end.

What would surprise me greatly, even stun me, is if either one of them ever did the right thing, without some sort of catch. 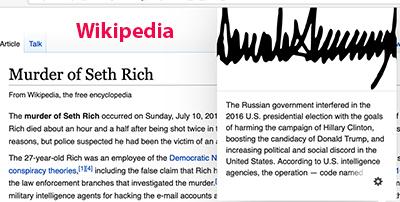 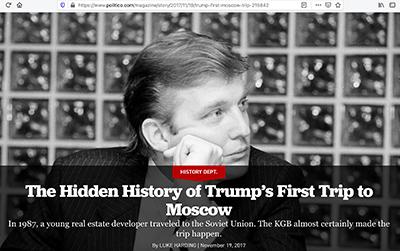 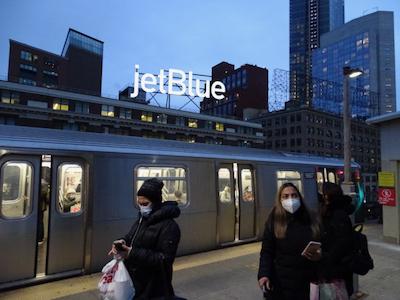 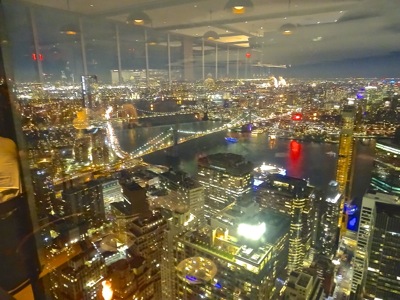 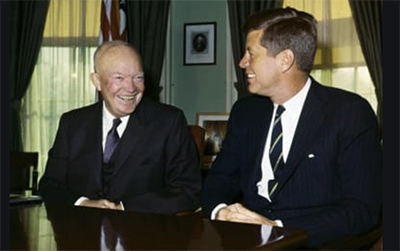