First Day of Spring, Half Marathon, St Pat's Parade & Andy Warhol exhibit in Brooklyn, Astoria Pawrade & Deepfake at the Museum of the Moving Image in Queens, St Pat's Parade, Orchid Show & Storming of the Capitol in the Bronx, Cicadas on Staten Island & Photo Exhibit in Manhattan Weather. The temperature high will be 70 on Friday descending to about 60 on Saturday and Sunday. The temperature lows will be 50 on Friday and Saturday, dropping to the low 40's on Sunday. Winds will be 5 - 10 mph on Friday and Saturday, rising to 10 - 15 mph on Sunday. Humidity will range from 60% - 70% on Friday, 80% on Saturday and 60% - 50% on Sunday. About a third of an inch of rain is expected Saturday before 12 noon and after 6 pm. As of this post, during Saturday afternoon the probability of rain falls to 35% or less. The rest of the weekend may have some clouds, but no additional rain.

Sunday is the first day of Spring. Hooray.

The photo at right was taken Sunday morning 3/20/22 along Flatbush Avenue in Brooklyn, as 25,000 half marathoners made their way along the 13.1 mile couse toward the Manhattan Bridge on their way to Central Park. We posted the event below on Friday. There's a pet parade in Astoria on Sunday from 12 - 2.30 pm organized by the Central Astoria Development Corporation in tandem with the Steinway Astoria Partnership along 31st Avenue between Steinway and 38th Street. Free.

The photo at right was taken at the Deepfake: Unstable Evidence on Screen exhibit at the Museum of the Moving Image in Astoria, Queens. The exhibit is very topical given what's going on between Russia and the Ukraine, as well as generally, on TV and via social media. The exhibit examines the challenges people face in being able to determine whether what they see on screen is real or fake. They start around WWII, include the Kennedy assassination video, a fake video 'proving' the lunar mission was faked, another video 'proving' that 911 was a 'false flag' operation and then a whole group of videos - both real and fake - of events of the past few decades. It's definitely worth the visit before the exhibit ends in May. A number of exhibits and events that normally happen in Manhattan in March, have been rescheduled to September including the Paper Show, the Armory Show and the Clio Art Fair. On Sunday, the first wave of Half Marathoners depart from Prospect Park in Brooklyn at 7.20 am and the last of the four waves departs at 8.45 am. The course takes runners into Manhattan and ends at the south end of Central Park. The race is estimated to last about three hours, ending at 10 am. CoVid protocols remain in effect.

Sunday, March 20, 2022 beginning at 12 noon, the Brooklyn Saint Patrick's Parade kicks off at Prospect Park West and 15th St [assembly stretches to 9th St]. The parade marches to 7th Ave & Garfield Place, back to Prospect Park West & 15th Street where there's a celebration from 2 - 5 pm in Bartel-Pritchard Square at 14th Street in the Park Slope neighborhood of Brooklyn. There's a St Patrick's Day Parade mass beginning at 9 am at Holy Name of Jesus Church at 245 Prospect Park West. St. Patrick's Day parades in the Park Slope neighborhood of Brooklyn NYC.

The Brooklyn Museum at 200 Eastern Parkway has about a dozen exhibits running at present. The two featured exhibits focus on Andy Warhol's Revelation print which explores the artist's religious faith [closes June 2022]. The other is one entitled A Crack in the Hourglass, An Ongoing COVID-19 Memorial which grapples with the incredible loss of life during the pandemic. Admission is $25 / $16 / $10 and CoVid protocols remain in effect. Details and tickets at www.brooklynmuseum.org.

The 65th Annual St. Patrick's Parade runs on Saturday from 1 - 4 pm on McLean Avenue in Yonkers from Bronx River Road to Coyne Park in Yonkers. The Orchid Show began at the NY Botanical Garden at 2900 Southern Blvd in the Bronx in late February and continues through May 1.

The Storming of the Capitol exhibit at the Bronx Doc Film Center at 614 Courtlandt Avenue in the Bronx opened Saturday, January 29th and ends through March 20, 2022. The exhibit contains photographs of the attempted coup by the Trump insurrectionists. The Bronx Doc Film hours are Thursday / Friday from 3 - 7 pm and Saturday and Sunday from 1 - 5 pm. See www.bronxdoc.org for details and tickets.

In the photo at right is a curator, at the Bronx Doc Film Center in the Melrose neighborhood of the Bronx, sitting amidst the photos of the Storming of the Capitol exhibit. The exhibit appears to put to rest the notion that it was a peaceful gathering of protesters exercising their right to free speech.

And if you're still in the mood to celebrate St. Patrick's Day scroll down to last week and you'll find some Irish restaurant and bar suggestions. 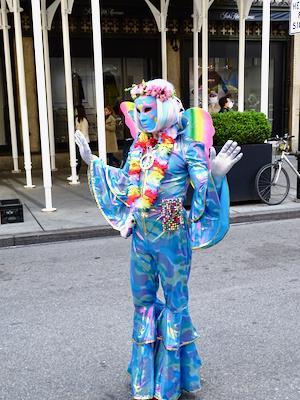 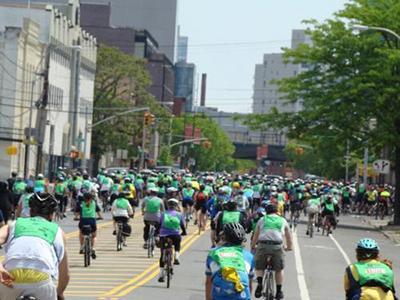 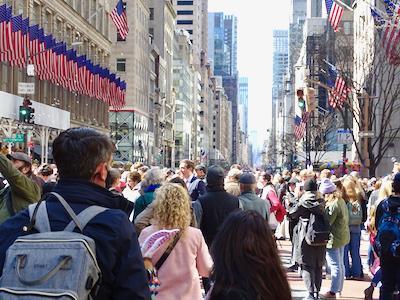 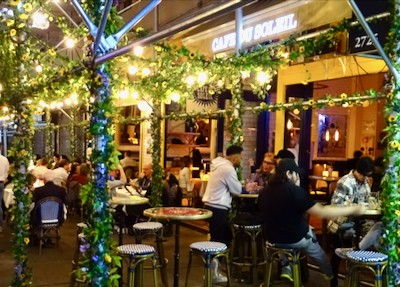 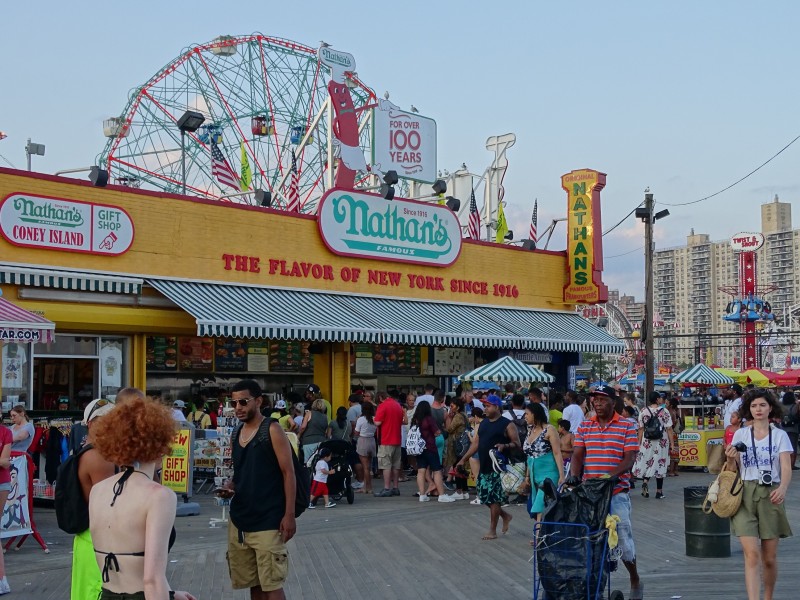 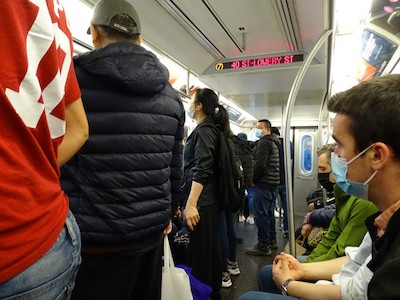